Lisa Blackstone is an Emmy-winning documentary filmmaker based in Minneapolis, Minnesota.

Blackstone was born and raised in the Chicago suburbs.  After graduating from Goucher College in Towson, Maryland, she heard the siren song of the Midwest calling her home.  Rather than return to the City of Big Shoulders, she migrated slightly northward to the City of Lakes...Minneapolis, Minnesota.  It was there that she found inspiration and support for telling people’s stories through documentaries.

Her work has been seen nationally on PBS and several cable networks including Animal Planet, HGTV, and MSNBC.

MISS TIBET: BEAUTY IN EXILE, a film she edited, premiered at DOC NYC in 2014 and has shown at DOCFEST in San Francisco and at the Asian American International Film Festival in New York City.

Blackstone is the recipient of the Jerome Foundation’s Film and Video grant for her documentary GRAPPLING GIRLS about the trials and victories in the lives of competitive female wrestlers. A short of the film screened at LUNAFEST in San Francisco and throughout the country. The short also earned a spot at the Tucker Center for Women and Girls in Sport Film Festival in Minneapolis, Minnesota.

Blackstone’s documentary POLKA TIME about a rapidly disappearing yet infectious polka festival in a tiny Midwestern town was selected for the PBS/ITVS series Independent Lens.  It garnered the Audience Award for Best Documentary at the Broad Humor Film Festival in Los Angeles.

Her other awards include Best Cultural Documentary Emmy for IRON RANGE: MINNESOTA BUILDING AMERICA; documentary editing for TALES OF THE ROAD; HIGHWAY 61; the Unity Award in Media for her work on the lifestyle economics series RIGHT ON THE MONEY!; the Science Journalism Award from the American Association for the Advancement of Science; and the Silver Award for Children’s Programming from the National Education Association for her work on the PBS series NEWTON'S APPLE.

Blackstone Productions is dedicated to uncovering the stories that we all have to tell. 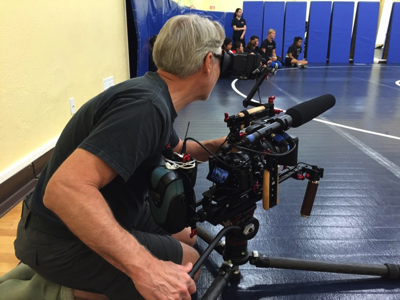 Robert Hutchings is an Emmy award-winning Director of Photography, Editor, and Post Production specialist.  As the premier cameraman and editor for Twin Cities Public Television he's made significant creative contributions to numerous award-winning national television programs and has worked extensively in dance, drama, and documentary formats.

He brings a unique combination of artistic vision and deep technical knowledge to his projects.  He recently presented an acclaimed white paper at the PBS Technology Conference assessing High Definition Cameras from a creative professional's perspective.

Mr. Hutchings’ Emmy Awards are for an array of public television documentaries.